Is Arenas Caming Village and its Surroundings

One of the most beautiful and wild side of Sardinia

The Sinis Peninsula is the fascinating promontory overlooking the sea that blends spectacular landscapes of unspoiled nature and beaches of soft sand, crystal clear sea and archaeological remains of various kinds and beauty, such as the city of Tharros and the Early Christian Church of San Giovanni.

The Sinis Peninsula, together with the island of Mal di Ventre and the rock of Catalano are a protected marine area of ​​great beauty, in the municipality of Cabras, just outside Oristano. 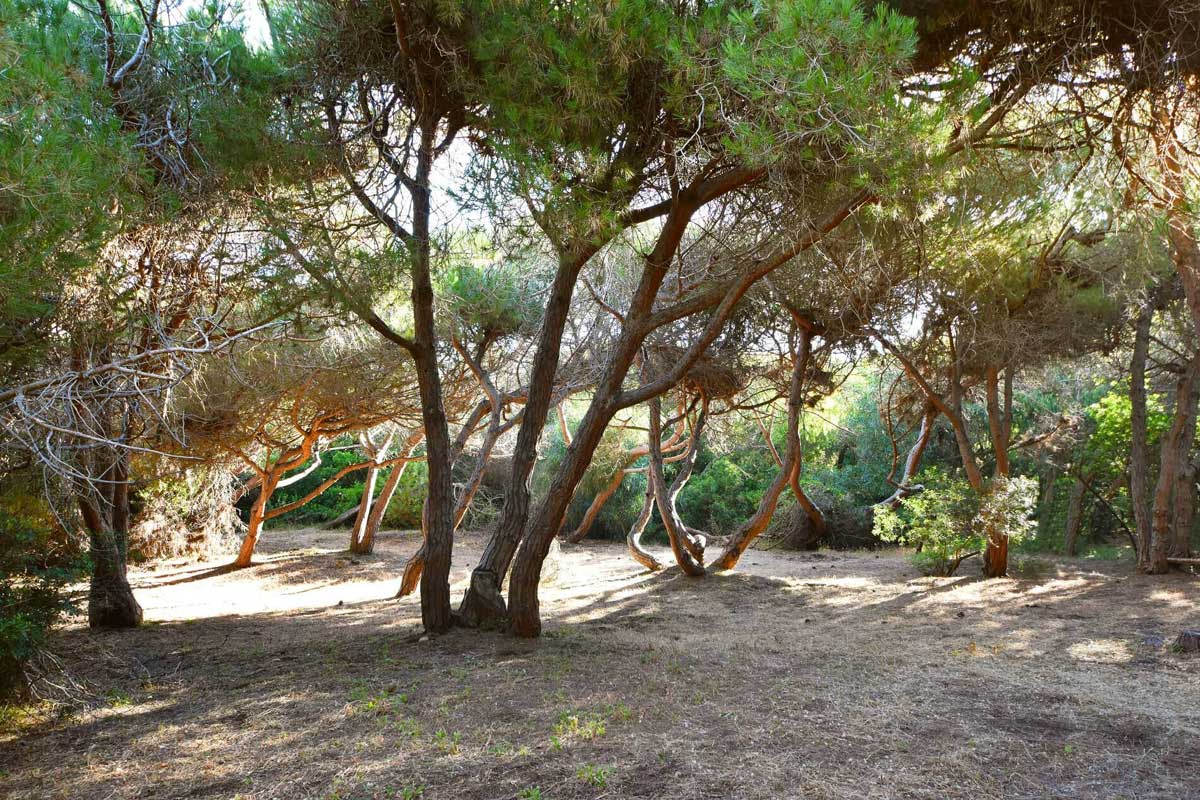 The Is Arenas Pine Forest

Is Arenas means “the sands“, it was the largest desert in Europe. Initially, to stop the advancement of the hedge, a dense network of green hedges was created, and afterwards the sowing of House Pines was carried out. In the 1960s, the Acacia saligna was also introduced.

Now to protect the beach of Is Arenas there is the immense pine forest of 750 square kilometers, one of the largest reforestation in Europe.

The area of ​​Barumini, thanks to the presence of the Archaeological Area on Nuraxi, is the most important testimony of the Nuragic civilization of Sardinia. Due to the grandeur of this Area, in 1997 it was listed as a World Heritage Site.

Also in the Municipality of Barumini, “Giovanni Lilliu” Center for Communication and Promotion of Cultural Heritage hosts temporary and permanent exhibitions as well as a market exhibition of handicrafts and educational workshops.

In Barumini you can visit the Museum of Casa Zapata, a museum built inside the residence of the Aragonese noble family of the Zapata, who arrived in Sardinia in the fourteenth century.

The Museum is divided into three sections: 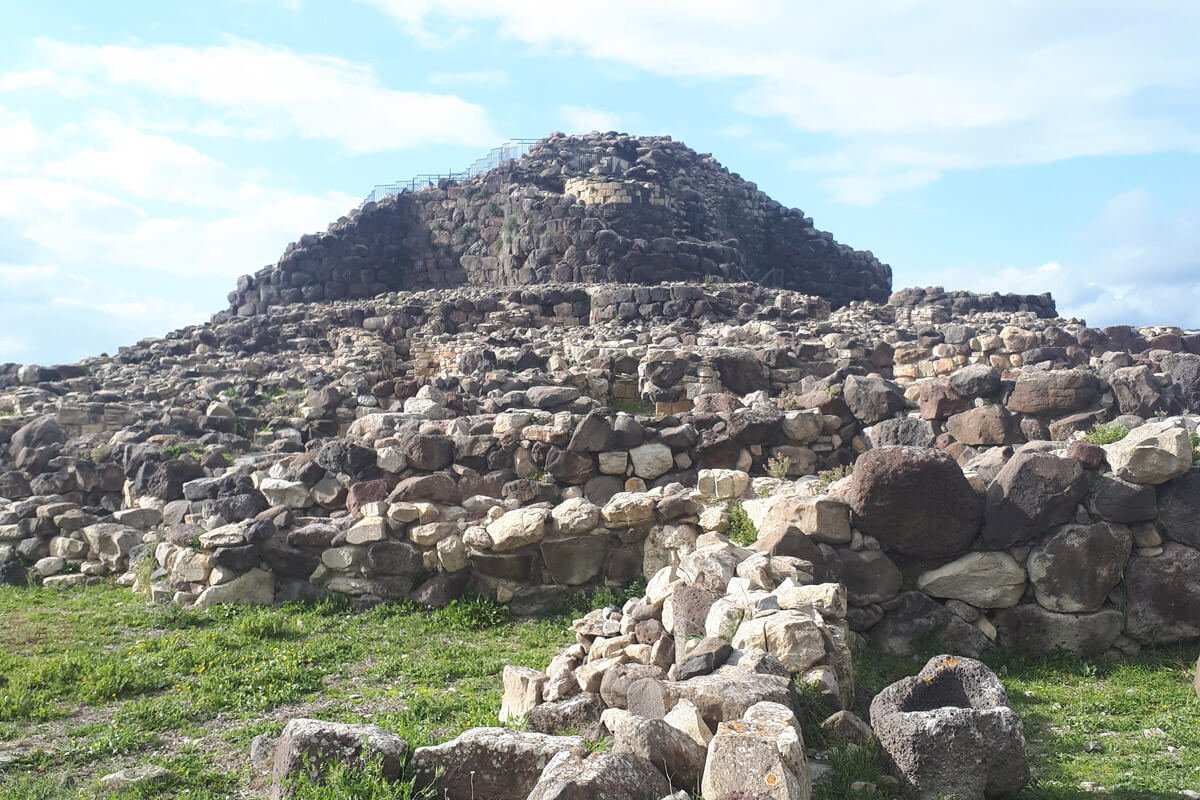 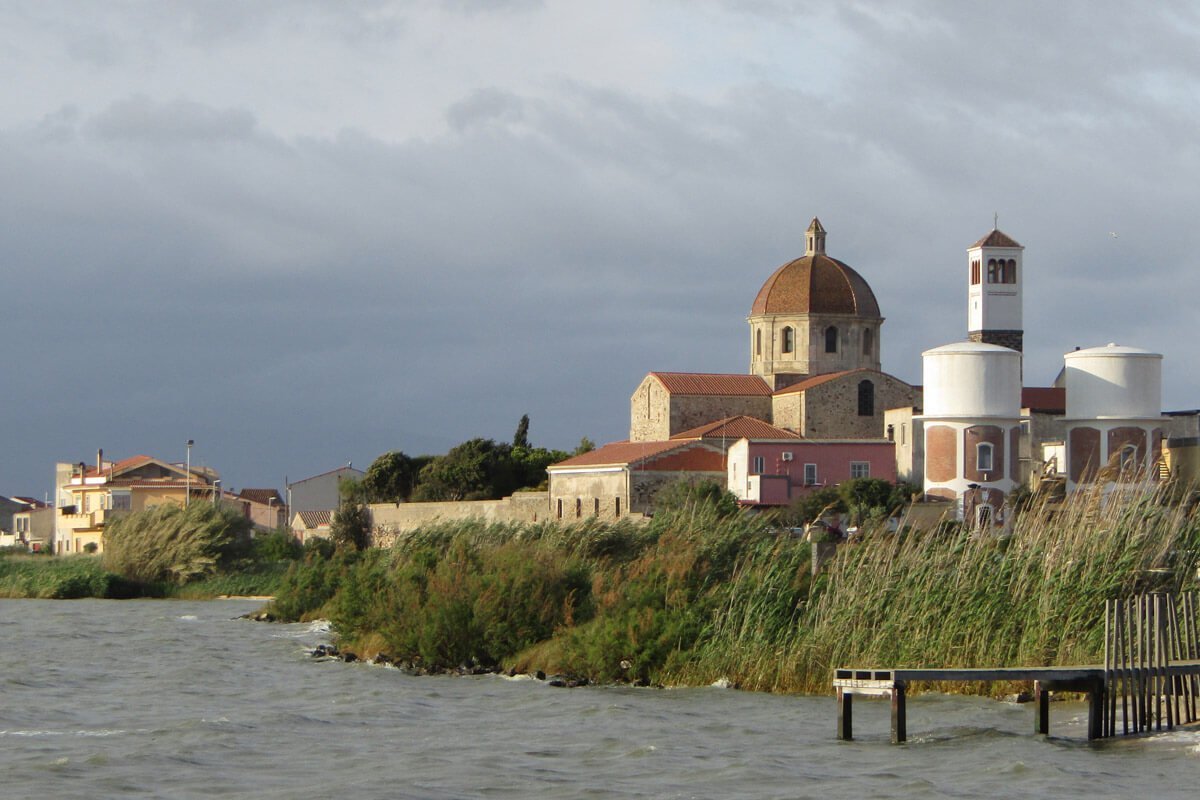 A beautiful town overlooking the sea

The territory of Cabras, a town that overlooks the coast of the Sinis Peninsula, is characterized by beaches of very fine quartz grains and by the presence of numerous testimonies of the Neolithic era, such as nuraghi and the village of Cuccurru is Arrius, with its colossi in chalky sandstone found in a sepulchral area and currently exhibited at the Giovanni Marongiu Civic Museum.

A city a few kilometers from Oristano, which rises on the pond of the same name (one of the largest in Europe) and whose territory includes the Sinis Peninsula and the wonderful islands of Mal de Ventre and Catalano.

A typical product of the area also known as the Oro di Cabras is bottarga, made from sun-dried and salted mullet eggs, widely used in the preparation of traditional Sardinian dishes.

In Cabras you can visit the Giovanni Marongiu Civic Museum, where the statues of the Giants of Mont’e Prama (8th century) are exhibited, nuragic sculptures in the round, one of the most extraordinary archaeological discoveries in the Mediterranean area.

The beauty of the landscape and the culture of Sardinia

About thirty kilometers from our Is Arenas Camping Village, at the end of the Sinis Peninsula and nestled on three hills, there is a truly suggestive archaeological area: Tharros, a city founded between the 8th and 7th centuries BC.

The city has gone through several historical periods and is very interesting for all archeology enthusiasts due to the numerous presence of remains that testify to the various changes and the various influences of its conquests it has undergone over the centuries.

Inside the fortified city there are nuraghi (prehistoric conical constructions typical of Sardinia, where there are approximately 7,000 scattered throughout the island), a Phoenician-Punic sanctuary (Tofet), funeral remains complete with urn and stelae, religious buildings including the Tempietto K attributed to the 2nd century and many other testimonies of its history such as buildings, roads and aqueducts. 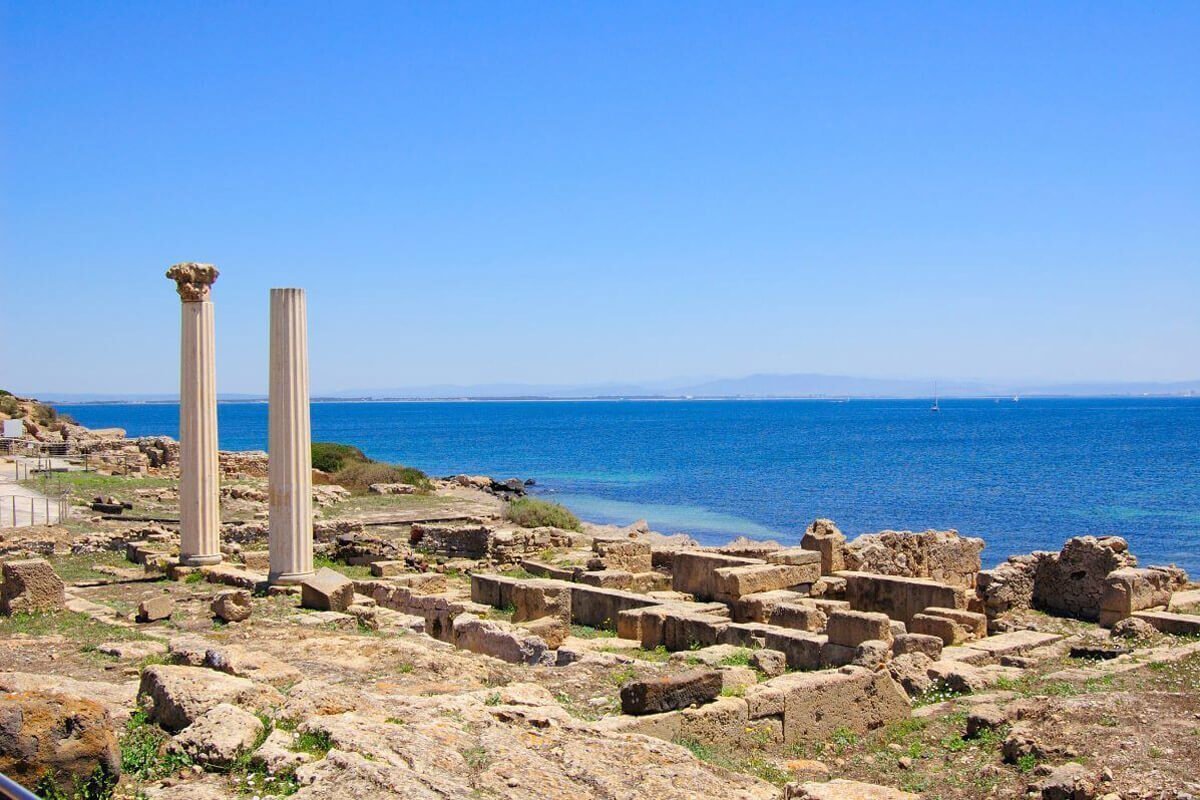 A must for your holiday in Sardinia

The island, granite, wild and unspoiled, is absolutely worth a visit for its breathtaking environment that fascinates all its visitors. Let yourself be conquered by the sea of ​​a thousand shades of turquoise that hides a seabed rich in crustaceans, molluscs, fish of all kinds and wrecks of ships and boats sunk over the centuries.

The small island (only 2.5 km long), dominated by the lighthouse at its center, can be reached in the summer by taking boat-taxis or organized excursions. It is advisable to bring an umbrella, sun creams, drinks and food with you, as it is free of commercial establishments.

The Rock of the Catalano

Rock of volcanic origin with a circular shape of only 700 meters in diameter, near the island of Mal di Ventre. Unlike the latter, it cannot be visited, much less accessible by boats of any kind.

The Church of San Giovanni in Sinis

The union between nature and culture in Sardinia

The small early Christian church, located in the center of the village of the same name, is striking for the particular shapes of its blocks in whitish sandstone, which evoke the walls of the city of Tharros.

Its central nucleus presumably dates back to the fifth century AD, to which the apse and three naves covered by barrel vaults were then added around the ninth century. Its renovation took place in the 11th century, and gave it its current appearance characterized by Romanesque elements. The church is one of the oldest churches on the whole island.

Next to it, the tower of San Giovanni, built between the 16th and 17th centuries, which takes its name from it and which dominates the archaeological area from a height of about 50 meters overlooking the wonderful beach of San Giovanni, with its very fine sand very white and from the sea of ​​a thousand turquoise shades.

A context that offers the eyes a show characterized by the fusion of nature and culture, a peculiarity of the entire Sinis Peninsula. 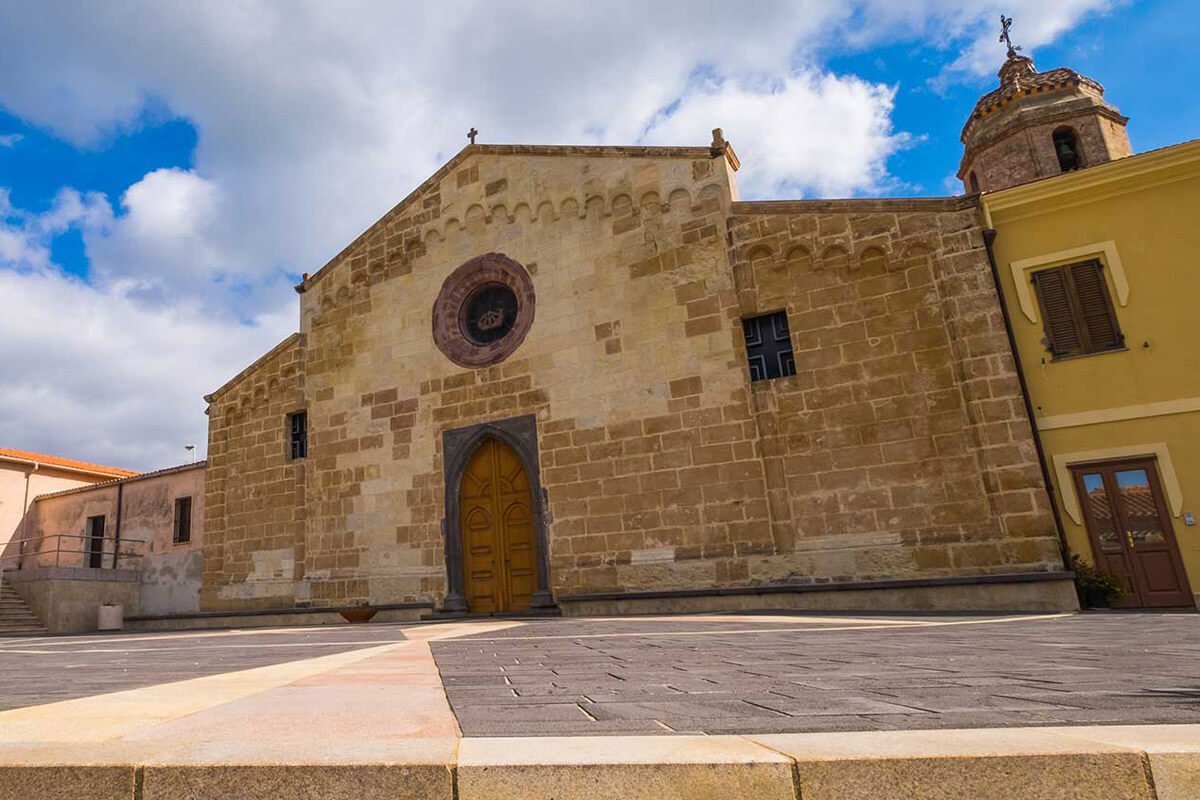